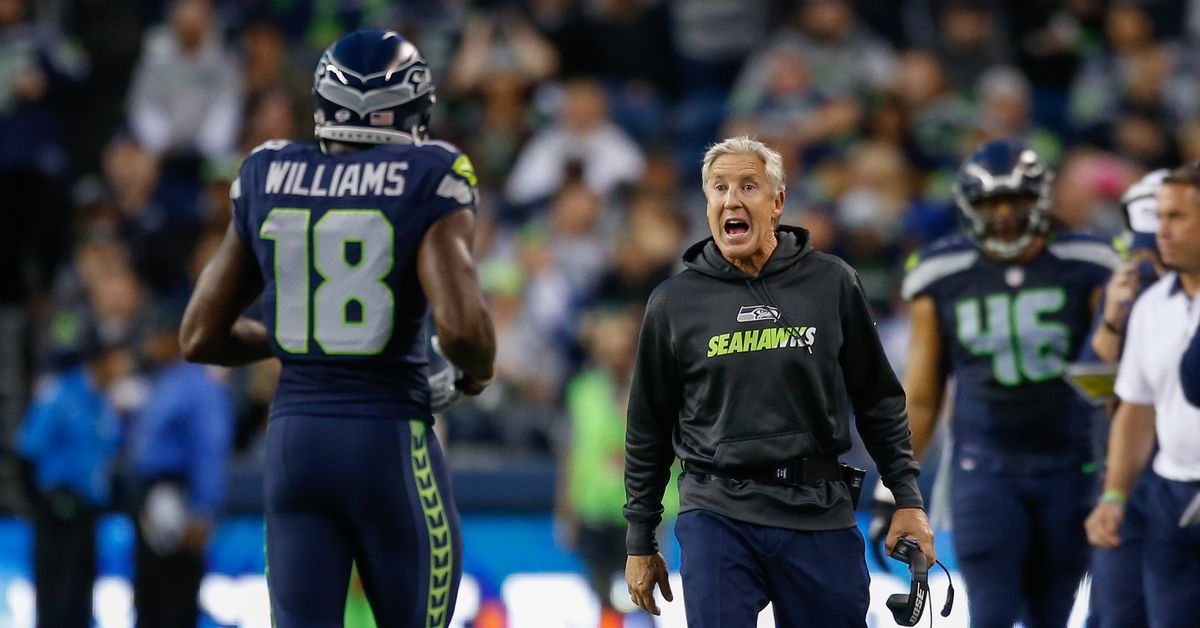 Every year, a member of the Seahawks’ 90-man roster surprises during training camp. It begins with gushing tweets from beat writers; Pete Carroll then echoes those sentiments with one of his standard lines; before long, the first week of the preseason comes along and we wait to see a player who, just a few months ago, we were entirely unfamiliar with.

The nature of Seattle’s team building, and Carroll’s ethos, is conducive to these type of surprises. Hell, John Schneider is out here sending brochures a decade into the 21st century.

Some of these training camp darlings, like Doug Baldwin, go on to become franchise greats. Others, like Kasen Williams, become but a moment in time. So while the careers they go on to have can be wildly different, what characteristics do these players share?

The most consistent is that they fit into Seattle’s mold at their position, whether it’s height, weight or athleticism. The Seahawks have a type at nearly every position, and they are aligned in looking for that kind of player whether it’s through the draft, free agency or trades. Beyond that common thread, the training camp starlets of Carroll and Schneider’s reign can largely be split into three categories. Though there’s some overlap between the groupings, here’s how they can be viewed, and who might leave a lasting legacy this year—earned or not—when camp opens next week.

As soon as Carroll and Schneider began making transactions to rebuild a team that was adrift in 2010, they took chances on talent, even if it meant ignoring, or managing, red flags. This extended to rookie free agency where it has paid off with varying degrees of success, with players such as Baldwin (the red flag being tension between Baldwin and then-Stanford coach Jim Harbaugh), Thomas Rawls (arrested while at Central Michigan), Rod Smith (dismissed from Ohio State due to a failed drug test) and Michael Brooks (a pair of knee surgeries). Seattle has continued to go down this avenue of talent acquisition following the 2019 NFL Draft, signing a pair of rookie free agents who could leave an impression in August.

Perhaps the most obvious choice to make a splash during the preseason is Jazz Ferguson. Not only is he a relatively high profile UDFA, he’ll be competing at a position which could use a shot in the arm. At 6-foot-5 and 227 pounds, Ferguson possesses the size the Seahawks have seemingly never found at the position. Similar to his fellow rookie D.K. Metcalf, what Ferguson lacks in agility and change of direction, he makes up for in explosiveness. His game is predicated on physicality and explosiveness, and he has both.

A former four-star recruit, Ferguson transferred to Northwestern State from LSU due to academic issues. After sitting out the 2017 season, Ferguson turned in a 66-catch, 1,117-yard, 13-touchdown campaign in 2018, being named All-American before declaring for the draft.

With Tyler Lockett sure to have his workload managed throughout preseason, Ferguson will be sharing time on the outside most notably with Metcalf, David Moore and Amara Darboh. He’s already shed the extra weight he came into rookie minicamp with, and previously drew Carroll’s eye in the spring. Ferguson is in the position to have a flashy preseason, and he has the makeup of a camp darling.

Knox is the latest offensive lineman in Seattle’s recent trend of targeting pedigree at the position, having started his final two years for the Buckeyes, earning third-team All-Conference in 2018.

A leg injury ended Knox’s college career just prior to bowl season, and wiped out his pre-draft process, however he is an intriguing prospect. He was one of the highest rated guards in his recruiting class, earned a starting spot on one of the best teams in the nation, and is now reunited with his former line mate Jamarco Jones. Like Jordan Simmons, Knox’s health and durability will be called into question (he will begin camp on the NFI list), but if there’s growth in his game during the preseason, it could be another shot of youth into a position that needs it.

Raw prospect who is a great athlete

Breaking: The Seahawks fall in love, often, with ideas of what uber-athletes could become with the right coaching. Tanner McEvoy was a plus athlete without a position who was brought in and tried on both sides of the ball, given a chance because of his great size and agility. Kenneth Boatright could explode off the ball—granted, he could do little else, but Seattle was intrigued enough to give him chances. This is the avenue most often explored by the Seahawks in their search for hidden gems.

A Temple wide receiver turned Baylor cornerback, Thomas was really one of those prospects who, after seeing their measurables pre-draft, you could make a safe bet they’d end up in Seattle—not unlike Simeon Thomas in 2018. A hair under 6-foot-3, a wiry 189 pounds with 33 ¾” arms, Derrek Thomas is a Seahawks cornerback in physical measurements and explosiveness. Former Seattle scout, and current executive director of the Senior Bowl Jim Nagy, acknowledged Thomas’s intriguing traits. Thomas should see plenty of snaps on the perimeter in August.

Still raw—entering his fourth year playing cornerback—the best case scenario for Thomas would be to land on the practice squad. But against lesser competition at both quarterback and wide receiver in preseason, Thomas will have plenty of opportunities to show off the physical traits that make him such a fascinating prospect to the Seahawks.

From Carroll and Schneider’s first season at the helm in Seattle, they’ve had flirtations with athletic move tight ends. Whether it was Jameson Konz, Cooper Helfet or Jimmy Graham, the Seahawks appear to be enamored with the idea of adding a mismatch at the position—even if they then struggle to correctly deploy them. Johnson is the latest in this line, with the former wideout weighing in at a slight 235 pounds.

Johnson is more explosive than the type of player Seattle usually looks at for the position. The Seahawks’ threshold for tight ends is around the 20th percentile in the vertical jump and 15th percentile in the broad jump. Johnson tested in the 64th and 80th percentile, respectively. Seattle looked at similar athletes prior to the draft (Jace Sternberger), and landed Johnson soon after the draft concluded. Though his output in his final season at Mississippi State was disappointing (17/238/1), Johnson will bring an element of athleticism missing from the position.

Working against future XFL linebackers in preseason, and with plenty of opportunity as Will Dissly returns from injury, Johnson could be in line to make a handful of splash plays and leave an impression.

Whether it’s through the local pro day, or local visits, Seattle scouts their region well. The strong grasp on their surrounding area, combined with Carroll’s familiarity with the Pac-12 has meant the Seahawks have found continued success with players along the coast. Baldwin is an obvious one, as is Jermaine Kearse. The aforementioned Kasen Williams made a valiant roster push once upon a time, while former Trojan Dion Bailey was seen as an heir apparent until regular season football began. Even Washington native and former Husky Tani Tupou was tried on both sides of the ball.

Keeping with that tradition, Seattle brought in a local product in rookie free agency who should have a legitimate chance at the roster, competing at a position the Seahawks love to keep well stocked.

Tiulu, another Washington native, enters the NFL as the reigning Big Sky Conference Defensive Player of the Year, after stuffing the stat sheet in his final season at Eastern Washington: Four sacks, two pass breakups, 6.5 tackles for loss and a forced fumble. Listed at 340 pounds, Tiuli was far more disruptive in college than his physical makeup would suggest.

Though he’s highly unlikely to find himself in the backfield as often as he was in college, Tiuli will have a good shot at the roster if he can play stout and disciplined run defense. Jarran Reed and Poona Ford should be viewed as the only locks for a position group that usually has four or five members—the rest is wide open.

An unexpected name will make a strong push for a roster spot when training camp opens on July 25—both history and Carroll’s philosophy tells us that much. Who it will be has yet to be decided, but expect it to be a player who falls under one of these categories.